Funding for California state parks can seem like a confusing process. To make things a little easier, we have broken down the ins and outs of park funding. The state park system receives funding from three primary sources – the General Fund, Special Funds, largely user fees, and when available, bond funding.

The state parks budget heavily relies on funds allocated from the General Fund. This funding source is ever-changing, routinely fluctuating along with the economy. Since FY 2007-08, General Fund has been as low as $112 million in FY 2012-13 and in a healthy economy, a high of $271.8 million in FY 2019-20. For perspective, DPR’s budget on average is .50% of the State Budget from FY 2009-2010 to FY 2019-20 (includes infrastructure). During that same time period, General Fund contributions averaged .13% of the State Budget.

This year, money allocated to parks from the General Fund is proposed to take a $40 million hit from what the Governor initially introduced in January. On top of this massive cut, state parks are poised for additional $30 million in General Fund cuts next fiscal year (2021-2022 budget) if California does not receive necessary COVID-19 relief from future federal funds.

The primary source of special funds are from the State Park Recreation Fund (SPRF), which is fees paid by visitors. About a third of funding for park operations is made up of park user fees, camping reservations, concessions, and special events. The size of the state park system has incremental grown for the past 10 – 20 years. While visitation has largely stayed the same, there has been increase in user fees collected. Between FY 2006-07 and FY 2016-17, there was an 1.24% increase in visitation and a 50.73% increase in user fees collected.

Concession sales from park visitors alone results in over $20 million for the system last year. Additionally, support from concessions have increased, from FY 2006-07 to FY 2016-17 concessions have contributed an increase of 73.11%.

Proposed FY 2020-21 Budget
Major loss of day-use fees due to limitation of visitors and parking lot closures caused significant declines in revenue as well as cancellation of all camping reservations. Camping contributes to nearly $7 million in park revenue, all of which have been cancelled and reopening plans have yet to be determined. Parking lot and park closures have greatly jeopardized this revenue source.

Over the years, California’s have supported investments in conservation related bond measures. The state park system has been the recipient of portions of the passed bond funds.

The most recent version of the budget proposes a shift of expenditure previously identified for general fund spending to be move to bonds. Specifically, we see an increase from January to now reflects $272 million of bond spending. In January, $45 million was proposed from General Fund to tackle deferred maintenance needs, and in May recommended to be from bonds funds.

The role of park partners

What is not fully captured in the state park funding description is the role local park partners and their incredible supportive services to state parks.

The park partner community is comprised of friend groups who provide financial, educational and programmatic resources to their local state park(s). Across California, a network of 89 cooperating associations that serve most of the 280 state parks. These associations, with more than 34,000 members and donors, provide critical funding for educational and interpretive needs that are impossible for state parks to meet. Associations contribute more than 17 million dollars annually to fund critical staff positions, exhibits, visitor center developments, junior ranger and nature walk programs, living history demonstrations, special events, and many other exciting projects.

Like all other nonprofits in California, these nonprofits have been severely impacted by the economic downturn. Being unable to fundraise during park closures, many have downsized, suspended services, and are awaiting federal PPP loan relief. With their own future jeopardized, it’s anticipated their supportive services to fund state park staff positions, programing for visitors, and other critical efforts will be reduced or eliminated.

At California State Parks Foundation we work to advocate for sustainable funding for state parks, and that is important now more than ever. We monitor and influence the budget process to ensure state parks and their users are supported to thrive. In addition, we help the park partners who are in parks to navigate changes and impacts to their operations, plus financial support through grantmaking.

In California, we have an excellent state parks system, but it takes support in so many ways to make sure it is well maintained and accessible for all.

*Chart in the thousands 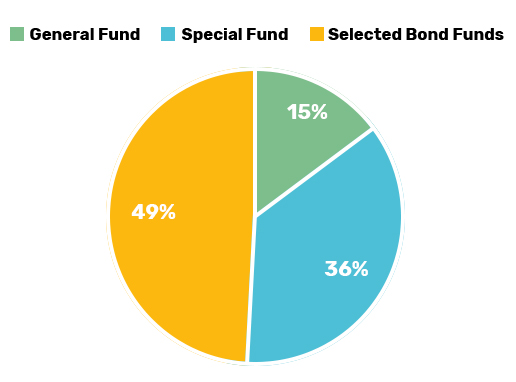