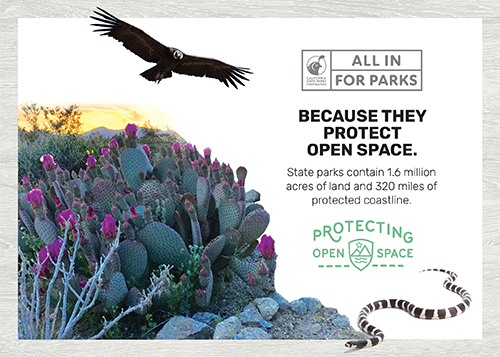 California’s state parks need our protection, as increasing development throughout the state has caused pressures to mount on the entire park system.

Over the years, the array of threats and proposals inconsistent with the vision of state parks and that have attempted to erode the legacy of the state park system have included toll roads cutting through the heart of a state park, residential and commercial developments, transmission lines, or desalination plants. These threats have become progressively more common, and increasingly complex.

Unfortunately, California’s state parks are often looked at as the path of least resistance for placing infrastructure and other development projects. In many cases, battles are being fought on a case-by-case, park-by-park basis without a clear, consistent statewide policy.

This absence of clear policy authority and a lack of strong protection tools available for state parks has unfortunately left the entire state park system at risk. Until sufficient legislative and legal protections exist, our state parks remain vulnerable.

Protect and preserve the California state parks system, for the benefit of all.

All In For Parks